Google Pixel 6a vs Pixel 6: what's different? - PhoneArena
Save on Galaxy S22/+

Aleksandar Anastasov
4
We may earn a commission if you make a purchase from the links on this page.
Amazing, affordable, awesome – no matter what the "a" in Pixel 6a stands for, chances are Google's latest phone will draw the attention of anyone with affinity for the company's products.
The Pixel 6a is the third member of the latest Pixel lineup, and the most affordable one out of the trio. It was announced as early as May 11 this year, however, it recently released two months later on July 28.
Of course, being the most affordable model out of the Pixel 6 lineup, the 6a comes with some cut corners like the camera system, the display, and more. Nevertheless, it has managed to keep the core Google phone experience and design.
Keep reading if you want to find out whether the $150 price difference between the Pixel 6 and 6a is worth it or not.

Get the Google Pixel 6a

The Pixel 6a is now available for purchase. At Amazon, you can save up to $550 right now if you trade-in your old device.
Buy at Amazon

You can now buy the Google Pixel Buds Pro to go with your favorite Pixel 6a color. The first major effort to create Pro earbuds resulted in Pixel Buds with Active Noise Cancellation and a whopping 11 hours of battery life on a charge.
Buy at Amazon
Jump to:
9.3

The Pixel 6a (left) and Pixel 6 (right)
Hardly a surprise, the Pixel 6a follows the same design language Google introduced with the Pixel 6 series. The two phones look nearly identical, with their signature rear camera strip stretching from side to side. Size, however, is a factor setting them apart. The Pixel 6a is the smaller phone, sporting a 6.1-inch display vs the Pixel 6's 6.4-inch one. It also appears that the Pixel 6a sports a "3D thermoformed composite" back, which is a fancy word for plastic. The Pixel 6 comes with a Gorilla Glass 6 back.
Google Pixel 6a
Dimensions

See the full Google Pixel 6a vs Google Pixel 6 size comparison or compare them to other phones using our Size Comparison tool.
Color-wise, the Pixel 6 and 6a both have three options.
Pixel 6a colors:
Pixel 6 colors:

The Pixel 6a's display (left) and Pixel 6's screen (right)
One more corner Google had to cut is the omission of a high-refresh-rate display – it's a 60Hz affair on the Pixel 6a. Not a deal-breaker, if you ask us, but it's a difference in smoothness you may notice if you're spoiled by screens like Pixel 6's 90Hz panel.
Display measurements and quality
View all
The CIE 1931 xy color gamut chart represents the set (area) of colors that a display can reproduce, with the sRGB colorspace (the highlighted triangle) serving as reference. The chart also provides a visual representation of a display's color accuracy. The small squares across the boundaries of the triangle are the reference points for the various colors, while the small dots are the actual measurements. Ideally, each dot should be positioned on top of its respective square. The 'x: CIE31' and 'y: CIE31' values in the table below the chart indicate the position of each measurement on the chart. 'Y' shows the luminance (in nits) of each measured color, while 'Target Y' is the desired luminance level for that color. Finally, 'ΔE 2000' is the Delta E value of the measured color. Delta E values of below 2 are ideal. 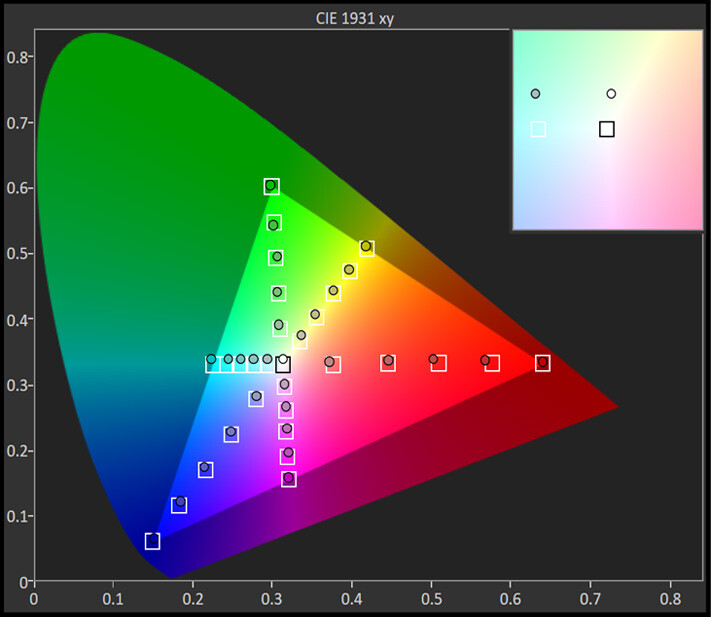 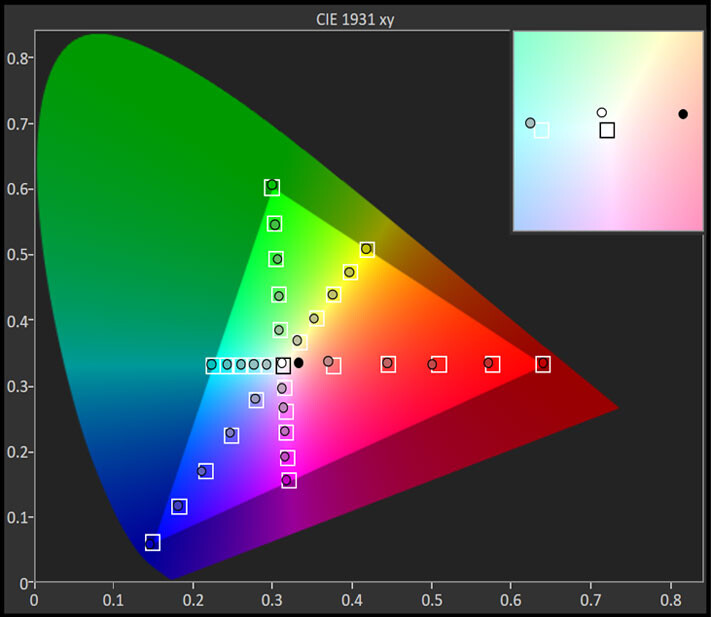 The Grayscale accuracy chart shows whether a display has a correct white balance (balance between red, green and blue) across different levels of grey (from dark to bright). The closer the Actual colors are to the Target ones, the better.

View all
As you can see, besides the difference in size and refresh rate, the Pixel 6a and Pixel 6 share similar brightness and color accuracy. This is especially impressive if you take into account the $450 price tag on the 6a.

Tensor is the name of Google's custom SoC, which made its debut on the Pixel 6 series last year. It is the chip powering the Pixel 6a as well, which is great news – chips this powerful aren't common among phones at this price point. According to benchmarks, the Google Tensor is not as powerful as the latest Qualcomm Snapdragon chips, but it's optimized for AI and machine learning tasks like speech recognition.
Performance-wise, however, the chipset is where the similarities between the Pixel 6a and the regular Pixel 6 end. When it comes to memory, the 6a has 6GB RAM, while the Pixel 6 boasts 8GB in comparison. This doesn't affect everyday tasks that much, though, as we found out during our review.
Here are our performance benchmarks for both phones:


If the T-Rex HD component of GFXBench is demanding, then the Manhattan test is downright gruelling. It's a GPU-centric test that simulates an extremely graphically intensive gaming environment that is meant to push the GPU to the max. that simulates a graphically-intensive gaming environment on the screen. The results achieved are measured in frames per second, with more frames being better.
View all
As you can see, since the chipsets are basically the same, the performance is generally balanced out. In some cases, the Pixel 6 beats the 6a, possibly due to the higher RAM. In other cases, however, it seems the 6a takes the lead, which might be due to the less taxing 60Hz screen, compared to the 90Hz one on the Pixel 6 that requires more power to sustain.

The camera system is usually one of the areas that companies target first when making a more affordable model. The same stands true when it comes to the Pixel 6a, which comes with the same main camera that's found on the Pixel 5a and even older models.
The inclusion of Google's own Tensor chipset gives it new life in the form of features like the Enhanced Magic Eraser tool for removing objects in photos, Real Tone for accurate skin tones, and Night Sight for better low-light performance.
Here are side by side comparison photos from the Pixel 6a and Pixel 6:
< Pixel 6a main camera Pixel 6 main camera >
The main differences we can spot from the samples above, is that the Pixel 6 main camera shoots a bit wider than that of on the 6a. The images also appear slightly different in terms of color temperature, with the 6a producing warmer colors compared to the Pixel 6.
< Pixel 6a ultra-wide camera Pixel 6 ultra-wide camera >
The ultra-wide shooter on the Pixel 6 has a wider field of view compared to that of its more affordable siblings, which can be instantly noticed in the sample shots shown above. Once again, we notice warmer tones on the 6a in these examples.
< Pixel 6a main camera in low light Pixel 6 main camera in low light >
This is where the Pixel 6 shows its superiority the most. The main camera on the Pixel 6a is noticeably less sharp compared to the pricier model. Not to mention how much more light the the Pixel 6 has been able to capture in the shot, making the whole image brighter and more visible.
Pixel 6a selfie camera: One feature from the higher-end variants that the Pixel 6a does lack, however, is the Motion Mode that keeps a fast-moving subject in focus. If you ask us, that is mostly an insignificant downgrade. The main camera itself, on the other hand, can easily be considered a downgrade, going from a 50MP on the Pixel 6 to a 12.2MP one on the Pixel 6a.
As fore the ultra-wide camera, the one on the Pixel 6a has the same exact specs on paper as that of the Pixel 6. In other words, a 12MP ultrawide powered by the Sony IMX386 sensor, with 1.25 μm large pixels, an aperture ƒ/2.2, and a 114° field of view. Another shooter stolen from the $150 more expensive models is the front-facing one, which has 8MP and the IMX355 sensor.
Now, let's take a look at sample videos from both phones.
Generally, the main camera on the Pixel 6a comes quite close to that on the Pixel 6 until, of course, we enter the low-light territory. By the looks of it, the 6a tends to produce more noise when shooting in dark conditions. Thankfully, it looks like the stabilization and microphone quality is just as good, though, which is a feat of its own.
The ultra-wide snapper, being the same on both phones, seems to be performing almost identically with the 6 and 6a.

Loading Comments...
COMMENT
All comments need to comply with our
Community Guidelines
Phonearena comments rules
A discussion is a place, where people can voice their opinion, no matter if it is positive, neutral or negative. However, when posting, one must stay true to the topic, and not just share some random thoughts, which are not directly related to the matter.

Things that are NOT allowed:

Moderation is done by humans. We try to be as objective as possible and moderate with zero bias. If you think a post should be moderated - please, report it.
Have a question about the rules or why you have been moderated/limited/banned? Please, contact us.
Join the discussion...